What Dr. Fauci Can Teach You About Leadership Communication

When I teach business communication, I ask students to complete what I call a “CommBook.” This is simply a journal of professional communication that they observe in the world around them that reinforces lessons from class. The entries can be either positive or negative examples. In reviewing students’ submissions from this spring semester, I was surprised to find a popular new entry—Dr. Anthony Fauci of the White House’s Coronavirus Task Force.

While it’s normal to see speeches from prominent business leaders like Elon Musk and Sheryl Sandberg, immunologists and physicians like Fauci are rare. My students cited not only his effective communication skills but how his briefings made them feel. Listening to Fauci explain the impact of COVID-19 and precautions we should take consistently made them feel better.

Fred Rogers famously talked about “looking for the helpers” in times of crisis. As the longtime director of the National Institute of Allergy and Infectious Diseases (NIAID) who’s advised six presidents on HIV/AIDS, Ebola, SARS, swine flu, and a host of other global health issues, Fauci clearly has the credentials of a helper. But how does he communicate complex, scientific information so effectively? How is he having such a profound impact on people during this most challenging of times?

Like all great communicators, it’s both what Dr. Fauci says and how he says it. Let’s examine both.

Alan Alda discovered this as host of PBS’s Scientific American Frontiers where he would ask scientists straightforward questions about life-changing inventions only to be met with several minutes of rambling jargon. This frustrated Alda so much that he endowed a center at Stony Brook University dedicated to teaching scientists how to communicate. The title of his book on the subject summarizes his confusion If I Understood You, Would I Have This Look on My Face?

But it’s not just scientists. It’s engineers, academics, lawyers, politicians, and, yes, even business people. What do all of these professions have in common? Typically, they’re all intelligent and well educated. The problem comes when they’re asked to share their insights with the world. That’s when many fall prey to a cognitive bias known as the curse of knowledge. That’s where we assume that our audience has the same background that we do and understands the same complex technical terms that we do. That’s why individuals who should inspire confidence as experts so often leave their audiences confused.

Not so with Dr. Fauci. Despite the fact that he’s talking about an unprecedented global pandemic, Fauci has mastered clarity of speech. “He has a remarkable ability to take a complex subject and make it understandable to anybody who’s listening,” says colleague Dr. Nelson Michael of the Walter Reed Army Institute of Research. Fauci distills. He simplifies. A typical Fauci explanation goes something like this:

“There are really two dynamic forces that are opposing each other here. The virus, if left to its own devices, will do that dark curve … (Fauci gestures curve with his hands) The other dynamic force is what we are doing, what we’re trying to do, and what we will do in the form of mitigation.” Fauci focuses on detailing exactly what’s happening during these strange, scary times. To do this, he often sticks to the five Ws stressed in journalism schools—who, what, when, where, and why.

Fauci also keeps it simple by avoiding cumbersome scientific terminology. We often lean on technical terms and jargon in our speech because we think it will make us sound smarter to our audience. As most get nervous about public speaking to some degree, we cling to these words like an intellectual security blanket—using them makes us feel like we deserve to be on stage speaking. In actuality, jargon like this ends up confusing your audience and inhibiting your ability to connect with them.

Instead, Fauci relies on relationships and easily understood metaphors as he outlines the need for extending precautionary measures. “The 15 days of mitigation have clearly had an effect … But the reason why we feel so strongly about the necessity of the additional 30 days is that now is the time—whenever you’re having an effect—not to take your foot off the accelerator and on the brake but just press it down on the accelerator. That’s what I hope—and I know—that we can do over the next 30 days.”

In his book Writing Without Bullshit, author Josh Bernoff suggests measuring your communication clarity with what he calls a meaning ratio. You can check this by dividing the number of meaningful words in a selected passage by the total number of words in that same passage. A clear, concise passage would be as close to 100% as possible. Technical jargon and business-speak drags your score down and, more importantly, confuses your audience.

Watch his briefings and you know Dr. Fauci’s meaning score would be high. In presenting him with the Presidential Medal of Freedom in 2008, George W. Bush noted that Fauci “still quotes what he learned from Jesuit teaching: Precision of thought, economy of expression.”

But what else do you see? How does he deliver these words?

How Fauci Says It

Dr. Fauci doesn’t look or sound like your typical dynamic speaker. The 79-year-old’s thick Brooklyn accent is punctuated by his coarse, gravel-like tone of voice. Standing about a head shorter than the presidents he’s served and sporting the conservative dress of a political appointee, he doesn’t stand out from behind the briefing room podium. But don’t be fooled by appearances. Fauci employs several effective vocal and nonverbal communication strategies.

Vocally, Fauci does two important things. First, he speaks slowly. Audiences need time to process what’s being said and what it means. Especially this audience at this time. Second, Fauci pauses. A lot. This provides people with even more processing time. A common misconception we have is that effective communicators speak nonstop. In fact, a study from the University of Michigan finds that speakers who use short, frequent pauses are better understood by their audience than their peers who speak nonstop without pausing.

Slow, deliberate speech accented with occasional pauses gives your audience time to understand what you’re saying. This is especially critical when you’re communicating complex information. The stakes are even higher when it’s medical information on an unprecedented global pandemic. On these two points, Fauci’s vocal delivery is just what the doctor ordered. 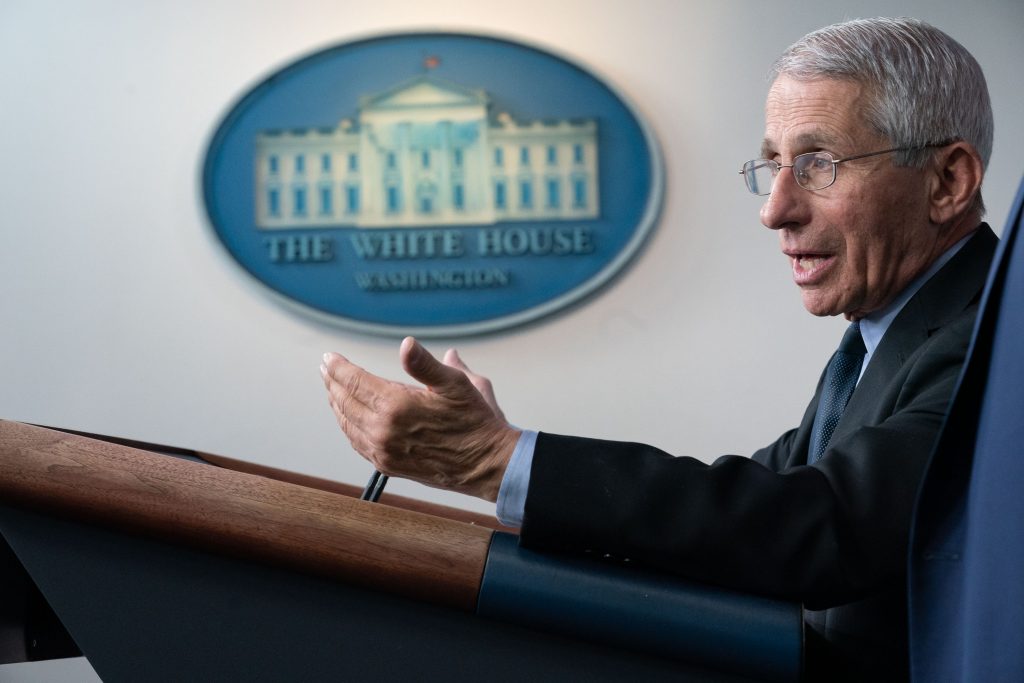 Nonverbally, he uses frequent crisp hand gestures to reinforce key points. He also uses his hands to illustrate dynamics such as recently when he used one hand to plot increased cases and the other to plot hospitalizations. Watch Fauci and you’ll also see that his open palms are often out to the audience, offering both caution and calming reassurance.

Finally, while his subject matter is far from light, Fauci keeps his facial expression bright and friendly. Facial expressions are an often-overlooked asset in your arsenal of communication machinery. You can say a lot with a look, as Fauci knows. His friendly face and occasional smiles comfort and calm his audience during this unsure, scary time.

Conventional wisdom tells us that we connect with those that we like. In her book, No One Understands You and What To Do About It, social psychologist Heidi Grant explains that likability comes down to conveying two things: competence and warmth. In communication, we often over-index on competence while giving little thought to our warmth. Not Fauci. He consistently conveys warmth through his friendly facial expressions, subtle smiles, accessible analogies, and simple word choices. When you combine this warmth with his decades of medical competence, it’s no wonder my students cited his briefings as a consistent source of hope.

Mister Rogers said to “look for the helpers.” Again, Fauci is high on that list for obvious reasons. But you can also learn from the helpers like him who are also effective communicators, especially in times of crisis—when what you say and how you say it matters more than ever. These simple communication tools can also help you inspire, lead, and comfort those who look to you as a helper as well.

Images courtesy of The White House