“I’m not sure what to do with my hands,” confesses Will Ferrell as the titular character in the NASCAR parody Talladega Nights: The Ballad of Ricky Bobby, as he awkwardly moves his hands during a TV interview. These words ring true for many charged with public speaking.

Maybe Ricky Bobby froze up because he knew about Albert Mehrabian. No, Mehrabian wasn’t the name of the rival French driver played by Sacha Baron Cohen in the movie. Mehrabian is the Armenian psychologist whose work highlights the outsized importance of our nonverbal communication—our posture, stance, arm movements, and hand gestures.

Recently I wrote about stage fright, which most suffer from in some form. Now I’d like to take a look at body language through the lens of the 2020 presidential candidates currently spending time in my home state of Iowa. While it’s not my intent to get political, the executives campaigning here are in the midst of perhaps the biggest, most public job interview in the world.

Let’s take a look at what we can learn from their nonverbal communication based on what I’ve observed on the campaign trail.

Command the Room with Presence 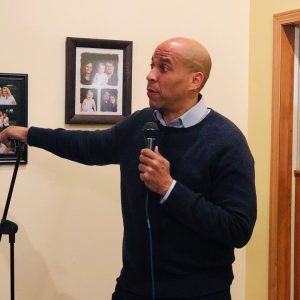 On a cold Friday night in January, my wife and I gathered at a crowded house party to see New Jersey Senator Cory Booker. As he spoke about his vision for the country, the 6’2” Booker stood tall and confident at the center of the room, accenting key points with deliberate, broad gestures that made use of his mighty wingspan. In her bestselling book Presence, social psychologist Amy Cuddy reminds us that we look to those with a bigger, more expansive physical presence, especially when it comes to leadership.

A man of few words, George Washington’s physical presence (also 6’2”—a literal giant of his time) was a big reason why everyone always looked to him to lead. You can see this trend at play in most presidential elections since. The taller candidate with bigger gestures almost always wins. There are a few notable exceptions including George W. Bush and Barack Obama, who won in spite of being slightly shorter than Al Gore and Mitt Romney respectively.

The lesson: Be big like Booker. Stand tall and employ broad gestures to reinforce key points. Ironically, I find myself giving this advice to tall people more often. Standing 6’2” myself (with absolutely no presidential aspirations), I get it. I slouch at times to avoid towering over people. However, when you’re center stage, take advantage of your gifts and stand tall. If you find yourself height challenged, do the same thing. Make yourself as big as possible with your posture and hand gestures.

Too Much of a Good Thing 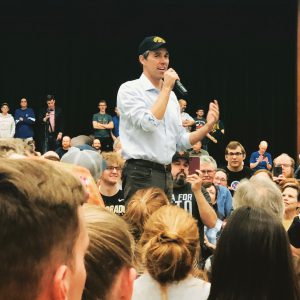 Broad, expansive hand gestures are good. But can you employ too much of a good thing? Last month Beto O’Rourke launched his presidential campaign with a whirlwind tour of 18 events across 13 Iowa counties. In watching his announcement video and various campaign stops, many made note of the energetic former Texas congressmen’s hand gestures. All of them.

Observe O’Rourke as I did recently at the Iowa Memorial Union and you’ll quickly note that he chops the air with a hand—sometimes two—as he says each word. Okay, it’s more like every other word but it’s still a lot. An expansive presence with broad gestures communicates confidence, but when you use gestures too much you look more erratic than enthusiastic. As presentation and public speaking expert Nancy Duarte says,“Don’t stand still, and don’t pace like a caged panther.”

The lesson: Hand gestures are like spices and seasonings. They add a dash of flavor and impact. However, when you overdo on the coriander everyone notices. Everyone. Choose which moments—which words, which ideas—you want to callout with gestures. 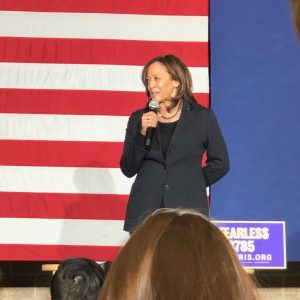 Back to Ricky Bobby’s question: gestures are good in moderation but what do you do with your hands? As we’ve seen, excessive chopping can be dicey. Pointing can be seen as … well, pointed. Enter the “thumb point”—pointing with your thumb while your other fingers form a soft fist below. Made popular by Bill Clinton and sometimes seen as the stereotypical political hand gesture, the thumb point has re-emerged on the 2020 campaign trail from Senator Kamala Harris.

But with Harris, the gesture is more than a political stereotype. A former district attorney and California Attorney General, Harris is known for her prosecutorial style. The gesture is part of who she is. Harris employs other authentic, effective hand gestures as well. When I observed her at a rally in Bettendorf, she transitioned to a matter-of-fact moment by resting her hand on her hip, leaning to one side, and saying, “Here’s a truth—climate change is real.”

The lesson: Oscar Wilde is rumored to have said, “Be yourself; everyone else is already taken.” As you get more comfortable with hand gestures find the ones that best fit your personality to use as accent points in your public speaking.

As an Iowan, I’m lucky to have a front row seat to the presidential election process. If possible, take a moment and see the candidates on the campaign trail if you can. Beyond what they’re saying, look at how they’re saying it and you might find something that helps you deliver your next big speech.