The Economics of Attention with Jamie Mustard and Holt McCallany 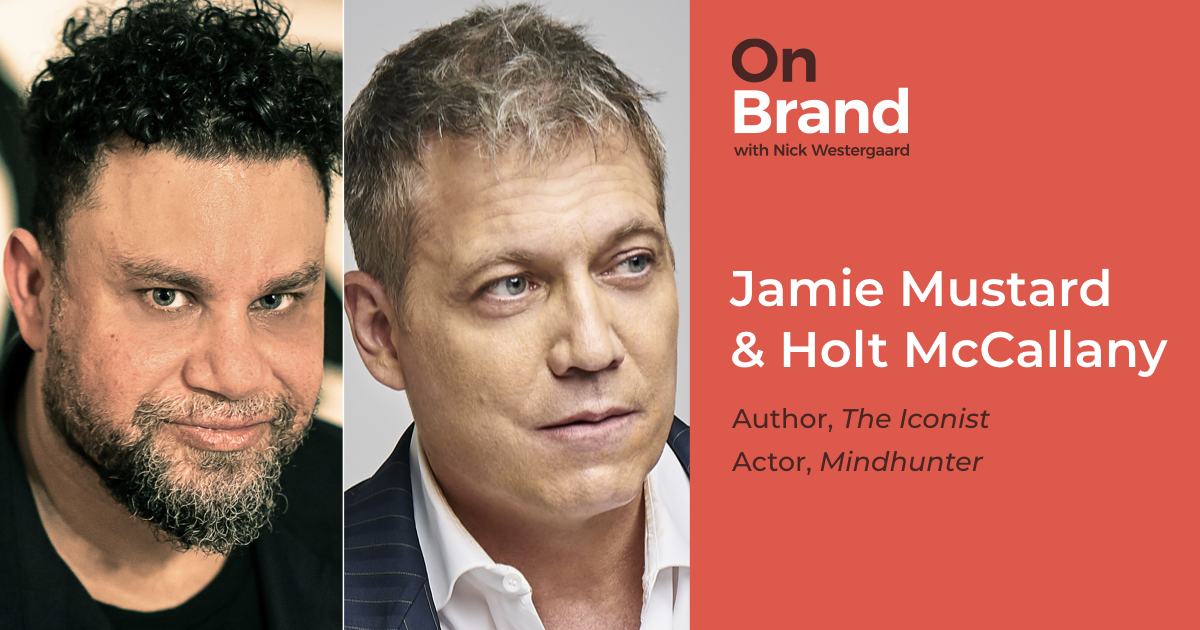 “Attention is the defining business challenge of our time.” This prolific idea was noted by not one but two guests this week. Jamie Mustard is a strategic multimedia consultant who helps create brands, ideas, and messages that stand out. His new book The Iconist features bold examples from the world of business, art, and music including the story of Mindhunter actor Holt McCallany. We’re lucky to be joined by both Jamie and Holt this week on the On Brand podcast.

About Jamie Mustard and Holt McCallany

Jamie Mustard is a strategic multimedia consultant and Iconist. His passion is to teach the science and “art of obviousness,” helping professionals, change agents, artists, and businesses confidently and at-will make their messages, brands, and ideas stand out to their desired audiences. A graduate of the London School of Economics, Jamie’s work is an explanation of the “economics of attention,” based on the primal laws of human perception called Blocks. He has spoken, educated, and inspired others with his work prolifically, including TED at the creative giant, Wieden and Kennedy. Jamie’s Iconist work has spanned some of the world’s leading companies, artists, and the globe. Growing up in severe poverty in inner-city Los Angeles, Jamie overcame obstacles to eventually codify a system of primal laws that can now help us all.

In a film career spanning over 30 years, Holt McCallany has appeared in well over 100 films and television shows, working with some of the world’s most storied directors. Throughout his varied and versatile career, Holt has worked for David Fincher, David O’Russell, William Friedkin, Lawrence Kasdan, Walter Hill, Clint Eastwood, Brian De Palma, and Michael Mann among many others. He has appeared in notable and pivotal supporting roles in movies like Fight Club, Three Kings, Black Hat, Alien III, Justice League, and Sully. Holt currently stars in the Netflix series Mindhunter for director David Fincher where he plays Bill Tench, a complex, real-life FBI agent researching serial killers in the late 1970s.

“Holt’s story helped me illustrate a point about The Dilution Effect.” One of the central ideas in Jamie’s book The Iconist deals with the economics of attention. Specifically, the fact that there’s so much information, so much content that it’s harder than ever to stand out. Holt starred in a critically acclaimed FX series called Lights Out that was canceled after one season. As the President of FX said at the time, “There were so many shows no one could find it.” Both noted that everyone in every field experiences this to some extent today.

“People feel invisible,” said Holt of the endless sources of online media and continuous assaults by advertising, echoing some of the themes from Mindhunter. Jamie’s concept of ‘blocks’ gives creators tools to stand out. Simply put, blocks are “large big road signs someone can understand in their lizard brain.”

What’s Wall Drug got to do with it? Of the many things I loved about the book The Iconist, I especially enjoyed that Jamie tells the story of Wall Drug, the massive, quirky drug store in Wall, South Dakota. Jamie referred to the store’s bold repetitive signage as “the first viral campaign.”

What brands have made Jamie and Holt and smile recently? Both were decidedly on brand with examples illustrating attention-getting ideas. Holt pointed us to Extinction Rebellion for their work calling attention to climate change and other causes through bold demonstrations. Jamie shared the story of Burger King’s “moldy Whopper” ad, which demonstrates the fast-food favorite’s lack of preservatives in gross detail.

To learn more about Jamie Mustard, check out TheIconist.org.

On Brand is sponsored by my book Brand Now. Discover the seven dynamics to help your brand stand out in our crowded, distracted world. Order now and get special digital extras. Learn more.